I recently underwent a relatively minor – but surprisingly painful – outpatient surgical procedure.  I spent the next two days crashed out at my parents house in a haze of Percocet, Zofran, and Ibuprofen.  On day three I stopped the narcotics, preparing myself to return to work.

But the pain didn’t stop.

I spent day three on the couch, certain that once I got past 72-hours post-op, the swelling would subside and the pain would cease.

But the pain didn’t stop.

Days four and five were a complete loss.  The incision site, near the base of my tailbone, ached with any movement; I missed two days of work because I couldn’t walk without feeling as though someone was stabbing my spine.  I couldn’t sit upright in a chair without a wave of pain crashing over me with such strength that it made me nauseous.

So I spent those days crashed out on my own couch, still unwilling to take narcotics, curled up with Aleve and a heating pad, guilt-ridden about missing work and generally feeling sorry for myself.

On the morning of day six, I called the doctor’s office, and spoke to the nurse.

“I thought it would be almost completely better after day 5 post-op,” I said, worried.  “And it is better, but it’s still really painful.”  I had it firmly implanted in my brain that my recovery would only take five days.  I have no idea where this number came from, but I clung to it desperately, a life-preserver of hope in a sea of discomfort.

“Oh, no,” she said, startled.  “No, I think you’ve got another week or so left to go.  Most patients with surgery at that site say it takes about two weeks before they’re feeling better.”

I turned off my phone; I ignored my overflowing inbox.  I missed a lunch with some co-workers, too depressed to get out of bed and into the shower.  I watched seven hours of television on YouTube, all shows about trauma care and the ER:  “An Hour To Save Your Life,” “Baghdad ER,” “Real ER 911:  The Bronx.”

Eventually I took one more Aleve, wrapped myself up in a blanket, and fell asleep.

I was angry that the pain was interfering with the life that I’d built up around me, a life that I loved living.

As soon as the thought formed itself wholly in my brain, I froze in my steps, halfway to my kitchen.

This was what my patients in the ER were feeling.

It was a moment of intense revelation in a year of profound revelations, a year that has completely changed my practice as an ER nurse.

I saw terrible things in Sierra Leone.  I saw adults die, bleeding out slowly in the dark, cold and alone.  I saw children die, locked with seizures.  I saw mothers holding their infants, watching their children die in their arms of malnutrition, starvation, malaria, Ebola.

I saw some of the worst suffering the world can inflict upon humans.

After four months of work in Sierra Leone I quit my job and flew to Belgium, locking myself away in a tiny, medieval tourist town.  I walked.  I ate fresh fruit and waffles.  I slept.  I walked some more.

In many respects I was extremely lucky.  I did not suffer nightmares, as did many of my colleagues.  I did not suffer debilitating panic attacks, or hallucinations, or anything more than a mild culture shock (I needlessly flushed the toilet a lot, solely because I could, and took dreadfully, wastefully, decadently long showers).

And as I meandered the narrow cobblestoned streets one cloudy afternoon, I happened to glance up at a series of façades above some windows across the street.  With a start, I realized they were the Seven Corporal Works of Mercy, the foundation upon which I decided, long ago, to define myself as a nurse.

I stared up at the carvings for a long, long time. 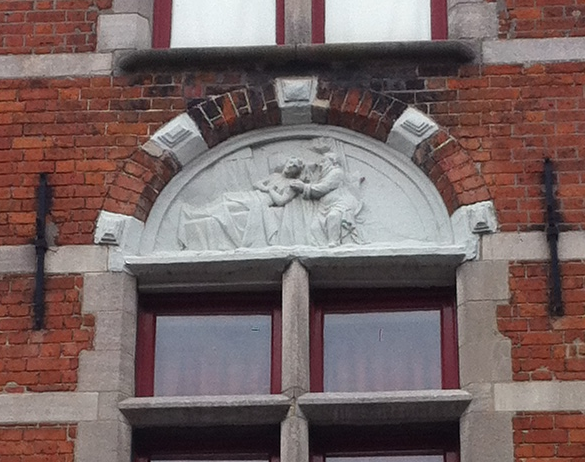 What I realized that day is something I’ve struggled to articulate for the better part of a year.  It is an awareness broken into two separate pieces.

First, the majority of the humans I meet for the rest of my life, especially here in the United States, will never attain awareness of the type of suffering I bore witness to in West Africa.  Here, isolated on our enormous, relatively homogenous, monolingual and tremendously wealthy continental island, we will likely never be subjected to an epidemic that leaves us dying by the hundreds in the street, or to starvation so severe our children die in our arms.  Most people here will never have this awareness because they cannot acquire it here.

In some ways, this is not their fault; it is instead a quirk of geography.  And luck.

Second, without visceral awareness of global suffering, the only suffering people can comprehend is their own.  And without a wide barometer, an ingrown toenail becomes a situation for tears and a panic attack.  A three-hour wait to be seen becomes “medical neglect” and a threat of a lawsuit.  A refusal to refill a “lost” narcotic prescription becomes “deliberate torture.”

These reactions are clearly out of proportion – but the only awareness people have of suffering is their own.

You cannot teach someone the relative degrees of suffering.

And thus, you must understand them on their own level.

I still haven’t articulated this well.  I may never be able to.  It is incredibly frustrating when my words fail me.

The “annoying” parents in room 30 are very young, uneducated, and frightened because they don’t understand why their infant is crying.  They are annoying because they love their child.

Since when is love annoying?

The drunk in room 21 doesn’t want to get sober, or get off the street.  He smells terrible and always asks for food and juice.  But he drinks because whatever he has endured in his life is so painful that it is better to be drunk and homeless than sober and in despair.

Since when is despair a reason to mock someone?

The woman in the wheelchair in room 9 speaks with a broad southern accent, and doesn’t understand how her diet affects her diabetes, and why her blood sugar is so high.  She never finished high school, and cannot read above a fourth-grade level.  The tech mocks her accent within the patient’s range of hearing.

Since when is a lack of education a reason for cruelty?

It is naive to believe that an ER can run solely on niceness, and I do not harbor such naiveté.  We face patients who are violent, cruel, rude, threatening, manipulative, and simply dangerous.  We are mandated to save the lives of humans who have willfully killed other humans.  We are hit, kicked, spit on, pissed on, shat on, and verbally and sexually harassed.

We cannot be nice to everyone, or we would lose our minds.

But this does not mean we should be unkind to everyone in return.

My revelation about the relativity of suffering, first planted on a cold sidewalk in Belgium and nurtured over the past year, has changed me completely.  The temper that flared and raged in me is almost gone.  Just…gone.  I am kinder to my patients.  I am fortunate enough to work in an ER where I can take time to listen longer, ask more questions, do more teaching.

I am far from perfect, and I mess up and get frustrated every single shift I work.  But I am no longer angry, or cruel.  And I work with, and have worked with, nurses and doctors who are cruel.  One particular physician is so burned out that he leaves his patients in tears, every shift.

Just as I cannot teach my patients the relative degrees of suffering, neither can I teach it to my coworkers.  But I can take this awareness I bought, at hard cost in the jungle along the equator, and pay its dividends to every human that I can, to every patient I have the privilege and duty to care for.

And that brings me back to pain.

I stood frozen in the hallway, partway to the kitchen, hurting, desperate for a cup of coffee and some waffles.

And thought, holy shit.  This is what pain means.

Pain means you can’t think, you can’t concentrate.  You can’t study for your certs, or read your fascinating but complex book from the library.  You can’t even focus long enough to write a thoughtful e-mail, or make a reasonable phone call.  Pain is so distracting that you are reduced to being simply an observer, a seven-hour-watcher-of-YouTube, instead of a participant in your own life.

You just want it to stop.

The subject of pain, and how we treat it in the US, is so much more complex than I care to address here.  It ties to the failures of our tattered healthcare system, an opiate epidemic that is decimating communities and exhausting emergency responders across the country, a national culture of blame that refuses to care for our most vulnerable populations.

But, at least for me, it unlocked yet another door to help me better understand my patients.

My pain will stop eventually.  My life will resume as it was before, probably even better than it was.  But the empathy I gained, though again bought at cost to myself, is priceless.

Because without empathy, or even simple sympathy, we no longer see our patients as humans.

And the moment we no longer see the human beneath the pain, the drugs, the booze, the broken leg, the heart failure, the obesity, the anxiety, the condition that has brought them to our door in the middle of the night — that is the moment we are no longer caregivers.

And that is the moment we need to walk away.