I think the reason she died the way she did is because I was so, so busy.

We all were.  The ER was slammed.  All 100 beds were full, including all the hall beds.  All four ICUs were completely full, creating a logjam that led to us boarding critically ill patients in the ER.  For the nurses, this meant caring for a patient who needed our undivided attention AND keeping an eye on another four or five patients sick enough to drag themselves through our doors in the middle of the night.

My critical patient was a tiny, frail, very elderly woman with severe dementia.  She was no longer verbal save for unintelligible mutterings.  She could not walk or move her arms, her limbs stiffened and tight with disuse.  She was completely incontinent.  She was entirely dependent on strangers, yet could not communicate with them in any purposeful way.

Her nursing home sent her in for a fever, and her bloodwork showed that she was septic from something.  In elderly women, it is almost invariably an undiscovered and thus untreated urinary tract infection that causes sepsis.  A long-distant past of childbearing years, multiple births in a time when c-sections were rare and prolonged labors were simply endured, and the inevitable pelvic floor failure that accompanies it decades later leaves this population at significant risk.

Myself and a second nurse both tried to thread a foley catheter into her bladder, and both of us failed, unable to find the opening to the urethra, her anatomy unusually complicated.  We called the resident, and when he also failed we all gave up and called the urologist.

He arrived an hour later, and as he guided the foley into her bladder we saw nothing but pus draining down into the bag.

I think on this moment now, years later, and wonder if maybe the reason she died is because I didn’t give her enough IV fluids.

Sepsis guidelines have changed and improved dramatically over the years I’ve been an ER nurse.  I now have a simple, powerful protocol that I can initiate without a physician’s order if my patient presents with the signs and symptoms of sepsis.  And one of the major components is massive fluid resuscitation.

I know I gave her fluids; her blood pressure was low, and I’m sure I put saline up.  But I don’t remember how much I gave her, how many times I changed the bag.

I was so busy.

But I do remember, towards the end, that we started pressors.

So it seemed like a minor miracle when the charge nurse called me and told me that an ICU bed had opened up at our sister campus, just a few miles down the road.  Transfer admission!  She was going to get out of my ER, and over to a bed where a nurse had the time to care for her!  Hallelujah.

Here are the things I do remember:

Her family was at her bedside, several adult children, maybe an adult grandchild or two, and I told them about the transfer, that an ambulance with a paramedic would transport her to the other ICU.  They said goodbye to her, and told her they’d see her over at the other hospital.  She didn’t respond, didn’t even seem to be aware that they were there.  This was normal for her, and they left.

I made endless photocopies of all of her medical records, including a copy of her advance directives, the legal form that indicated that she wanted neither intubation nor CPR.  I handed this pile of papers, including the DNR form, to the ambulance crew when they arrived.

And as they stood outside the room reviewing her records, I ducked quickly back into her room one last time.  I remember looking up on the monitor, its dull yellow numbers, her systolic blood pressure reading 70.

If we could live our lives with foresight and hindsight and a pause button at our disposal, I would have slammed my hand down on that button at this exact moment.  Stop.  Think.  Look at the big picture.  What the fuck is actually going on here.  Look at your fucking patient, not just at a number on a screen.

But I was really, really busy.

And I left the room.

The ALS crew transferred her to their gurney, bundled her up against the cold, and wheeled her out of the ER.  Almost instantly one of the techs was in the room, cleaning and disinfecting the equipment, changing the bed, emptying the trash.

I signed off on my charting, clipped the stack of papers together, and dropped them off with the secretary.

I’m sure there was another patient in the room by the time I walked back to my chair.

It was several hours later, and I was still busy.  I was sitting at the nurses station, scribbling away on a chart, and a shadow fell across my desk.  I glanced up, blinked, and smiled as I recognized the ALS crew.

“That old woman you signed out to us?  The ICU transfer across campus?”

The paramedic was giving me coldest, angriest look I’d ever received.  His voice was flat and calm.  Fury radiated from him in huge, violent waves.  My smile faded, and I was suddenly frightened.  “Yes?”

“She died in the ambulance.”

My throat tightened, and my heart dissolved in my chest.  “Oh.  Oh, god,” I whispered.  It was a ten minute drive from us to the other building.  I had let her go and she had died in less than ten minutes.

The paramedic continued in his razor-sharp, endlessly calm tone.  “So we delivered a dead body to the ICU nurses.  I had the bottom handle of the gurney in one hand, and her DNR in the other as we walked in.”

I stared back at him, utterly horrified.  “I’m so, so sorry,” I said, and although I meant it, it was still, at that moment, empty and useless.

Maybe I’d have been able to call her family, to get them back to my ER, back to her room, to be by her side.  I doubt it, somehow; she died so quickly.  But maybe the motion and bustle of transferring to an ambulance gurney was enough to tip her over the edge; if I’d kept her in her ER bed, warm and comfortable, she’d have held on long enough for them to turn around and come back.

It’s a useless game, and one we can never stop ourselves from playing.  For in the end, nothing changes the outcome.  Nothing changes the fact that she died in the back of an ambulance, that her family was not there, and the only person with her was a paramedic who looked on in shocked surprise and thought to himself, the nurse said she was stable, and she lied.

I still, to this day, regret my part in her death.

A few months later, still at the same ER, still as busy as ever, an elderly woman arrived to my assignment with crushing chest pain.  J., one of my favorite techs, stepped into the room with me, and together we worked to get her on the monitor and get her EKG.

“I think I’m going to go see my son today,” she said to us in a thin, reedy voice.

“Oh, yeah?” said J., her broad east coast accent stretching the word out to at least three syllables.  “Where does he live?”

“He died twenty years ago,” she replied.  J. shot me a look over the woman’s head, and I met her gaze.  This is universally a bad sign.  When a patient thinks they’re going to die, they usually are.

“Let’s find out what’s going on with you first,” I said, ducking the issue.

What was going on with her was all bad.  EKG changes.  Steadily increasing chest pain.  Shortness of breath.  Then her blood pressure started to go.

The ER was in chaos, her case mixed in with the madness.  Labs got lost, the orders entered incorrectly.  A repeat troponin took twice as long as it should have.  The cardiology resident came to the nurses station, looking for results.  I called the lab again, nearly screaming in frustration.

A repeat EKG, more changes.  Her O2 sat dipped, and we put her on a non-rebreather, the mask hissing loudly in her face from the 15L of oxygen pouring through.  Hypotension.  Cardiology ordered pressors.  And for some reason, as the pressors started infusing, she began crying out in pain.

It hurts.  The monitor alarmed.  The oxygen roared.  Her family tried to comfort her.  It hurts.  Her husband, terror in his eyes.  No CPR.  Everything else is OK, but she doesn’t want CPR.  I upped the pressors again.   The IV pump beeped and squawked.  It hurts.

The troponin finally resulted from the lab, abnormal.  The cardiology resident gathered his lab values, his EKGs, his chart around him, and called his attending.  They spoke quietly for a few minutes.  And then he hung up the phone.

I stared at him for a moment.

He nodded.  “Repeat it as much as you need.”  And he turned to her room to tell her and her family that she was going die.

I ran to the med room, grabbed syringes of morphine.  I grabbed J. on my way back.  “We’re shutting it all down in room ten.  They’re going to let her go.”  She followed me into the room.

As the resident talked quietly to her weeping family, I shut down the IV pump and disconnected the pressors.  I drew the last of the medication out of her IV line, flushed it with saline, and slowly pushed the morphine.  J. took the mask off her face, and spun the oxygen off.  I reached up and hit the button on the monitor.

The room was suddenly quiet, and with the quiet came calm.

We put her on a tiny amount of blow-by oxygen, not enough to bother her but enough to prevent the feeling of suffocation as her breathing slowed.  We took off all the lines and wires.  We covered her with a warm blanket, adjusted the head of the bed.

Her eyelids drooping, the woman glanced up at J.  “I’m going to go see my son,” she murmured.

One of the quiet secrets of the ER is in its unlimited potential for redemption.

We cannot always provide a safe, compassionate space for our patients to die.  Frequently it is because we are too busy fighting hard for their life.  But when the opportunity presents itself, when we recognize that moment, that space before the end, we have the chance to create something calm, something kind, something very very human.

I still carry my regret, but it is no longer the burden it once was.  For when I am fortunate enough to be present when another patient is allowed to pass through death calmly, warmly, loved, and not alone, I remember her with gratitude.

And I hope she continues to forgive me. 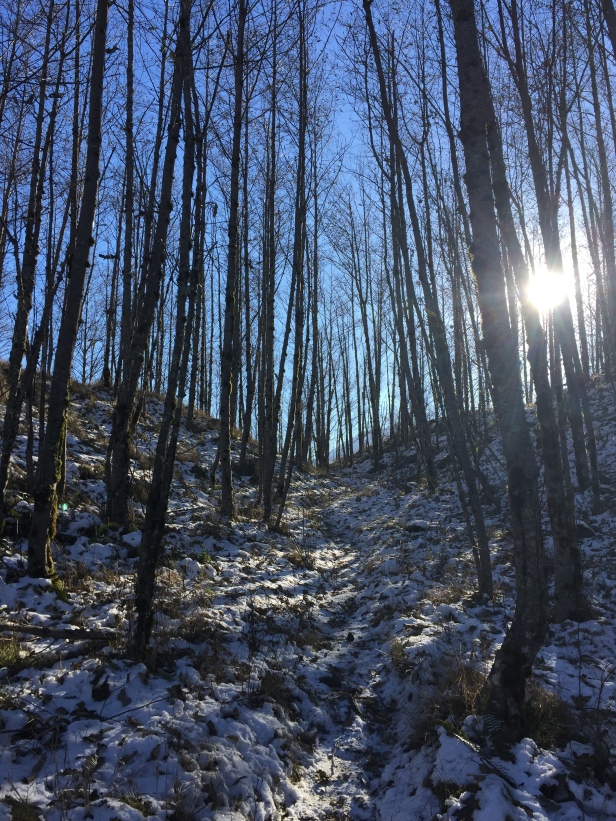