This was originally posted on Facebook on December 4th, 2019.

This is the underwear that no woman wants to wear.

And it’s not just because it’s a plain cotton sports bra the color of Pepto-Bismol.

It’s because this is the underwear we give to survivors of rape and sexual assault after we take their own underwear as evidence.

And we give them some Fruit from the Loom to wear home, back to a life and a world they no longer recognize and no longer trust.

But here’s the kicker: That boring sports bra is WAY way WAY better than what some survivors get when they’re discharged.

Some women have ALL of their clothes taken for evidence. Shirt. Undershirt. Pants. Bra. Underwear. Even their socks. And if the local forensic/sexual assault program that cares for them doesn’t have — or won’t buy — or can’t buy — clothes for them, they get discharged in hospital scrubs.

Ever seen a woman who’s just been raped, just had a three-hour forensic exam, just had every surface of her battered body swabbed and photographed and inventoried for the police, ever seen her walk out of a hospital wearing oversized hospital scrubs —

—and her arms wrapped tightly around her chest, ashamed, because she doesn’t have a bra to wear?

And I absolutely refuse to ever see it again.

This is $150 of underwear from Kohl’s. My team and I buy this underwear ourselves for our patients, because we are no longer willing to let any of our survivors go home without a bra, or without a decent pair of underwear.

If you are looking for a place to donate something meaningful this holiday season, reach out to your local Forensic Nursing team, rape crisis center, or domestic violence shelter.

Go to Wal-Mart, or Kohl’s, or Target, and buy clothes you’d feel comfortable in curled up, safe at home, watching TV. And donate them.

New underwear, a comfortable bra, a comfortable pair of pants, a soft hoody, squishy socks — all of these things can help make a woman who has survived a violent rape feel like a person again.

A person.
Not a victim.

Because it’s a long walk down that hallway, out of the hospital, and back into the world.

At least she can be comfortable as she takes each step.

Looking for a local organization that supports survivors of rape and sexual assault? You can start here: 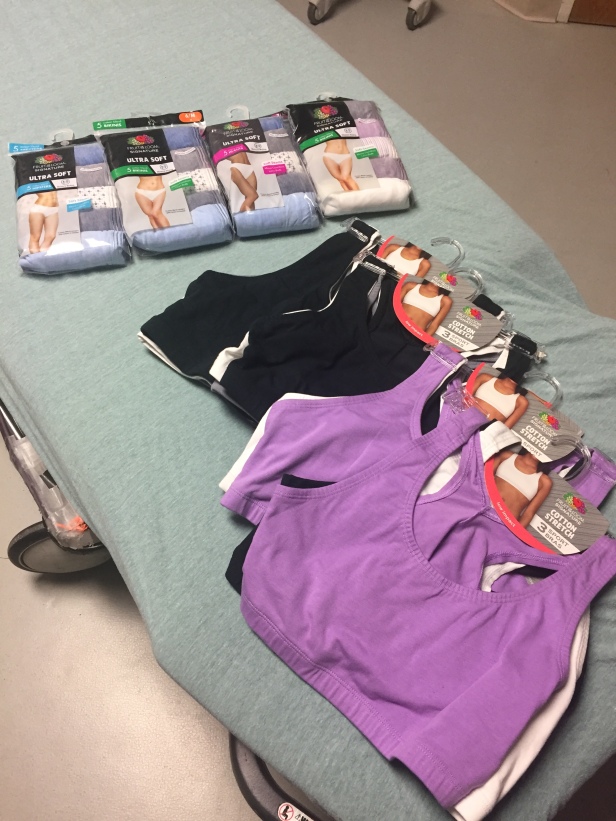 4 thoughts on “This is the underwear that no woman wants to wear.”