One of our best nurses came up with an idea as we started to discharge our very first survivors. She tore colorful strips of cloth from a lapa, and asked the survivors to tie one of the strips around a small, unassuming tree growing in front of our ETU.

At first, the survivors – and the Sierra Leonian staff watching the discharge ceremonies – were pretty confused. “Why do you have them do that? What does that mean in America?”

And we had no real concrete answer other than, “It’s the Tree of Life.”

Of course, there are many answers. We have them do that so that there is one thing left at our ETU that they touched which we did not need to spray with chlorine. We do it so that we can look at each strip of cloth, and remember a face. We do it so that people in the community who drive past the ETU can see this small, colorful tree, and know that good things can happen here.

And the tree is right next to the huge ambulance bay doors, near triage. We do this so that when someone feeling sick walks up to triage, or looks out the back window of an ambulance waiting to back into the unit, they can see all the ribbons, and have hope.

The next day a thin layer of concrete was smoothed over the little wall, and in it someone had written, “The Tree of Joy.”

One of the doctors saw this.

“But it’s the Tree of Life!” he whispered.

I grinned. “Not anymore.”

Today, I walked into the Confirmed Ward, with extremely good news for two of my patients. “Your blood is negative — you have survived Ebola. You can go home.”

My patients, a man and a woman, smiled and cheered and headed to the discharge area. There, at the edge of the red zone, they discarded all their belongings, stripped off all their clothes, showered, and walked into the green zone as survivors.

It is analogous to a birth in more ways than I can count. They leave an enclosed space, where every physical thing they need to survive is provided for them. They leave this space naked, to be clothed immediately on the other side. And above all, they walk out into a world that is utterly and completely new.

The day before the blood test results I spoke with the woman for a long time. We had been chatting idly – she was well and strong and had never been badly ill – and suddenly she looked at me and said, “You know, most of my family is dead.”

I nodded. I had cared for two of her siblings already. Her brother had died quietly in the night, silent and alone. Her sister, a stunningly beautiful woman, arrived vomiting and with diarrhea. That afternoon she began to bleed underneath her skin, bruises the size of quarters, then half dollars, then clamshells. The next morning she was a mass of bruises, petechiae, and blood started to seep out of her skin, and into her mouth, into the vomit, and the diarrhea.

Her death later that day was a moment for which I do not have words.

My patient continued, “My father died first; we were told it was hepatitis, so we buried him. Then we became sick, and one brother died at home. And the rest of us are here.” Out of five siblings to present to the ETU, she was the first one to survive.

“So when I go home, what is that? How do I go where no one and nothing is left?”

Her discharge ceremony was joyous and we erupted in applause as she was presented her laminated certificate of a negative Ebola test – the mark of a survivor. She walked to the tree, tied her ribbon, and we cheered again.

I congratulated her, bumped elbows with her – a gesture that nowadays communicates anything from a handshake to a hug – and she gathered her new belongings and climbed into the transport van.

And through the window of the van I saw her look back towards the ETU, as if she could see through the blue tarp double wall, the chain link fence, and back to the ward where her last remaining siblings lay sick in bed. And on her lovely, narrow, expressive face, all the emotions of that moment ran together.

And if that’s not Life, I don’t know what is. 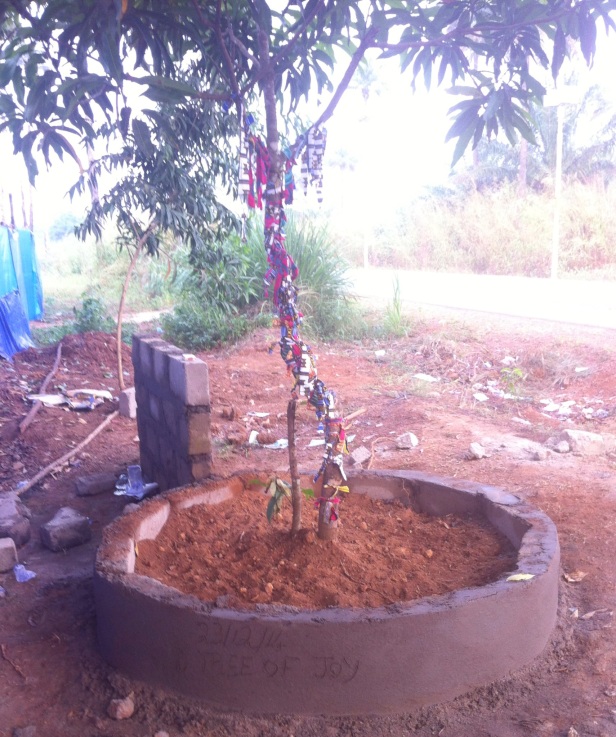